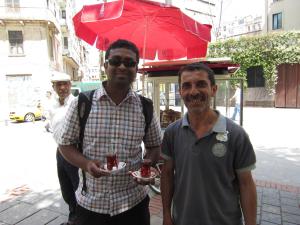 After traveling for 24 hours from India and spending Tushar’s birthday at Mumbai airport, we were pretty tired. Having said that, it was very exciting to be in a city that we didn’t know too much about, ready to celebrate and immerse ourselves in a new culture. It was morning when we arrived, and we immediately went to Galata Tower, where we would be meeting our host, Namik, whose studio we would be renting for 7 nights. We got to this beautiful old cobblestone square, and at its center stood a large medieval tower. Local people milled about getting ready to start their days. Street traders were setting up their stalls, while others sat in street-side cafes eating breakfast. While waiting, I went to a local bakery and picked us up some breakfast pastries (filo pastry lightly dusted with powdered sugar) and fresh lemonade-mmm. Well, about an hour later, we were getting a little impatient so figured we should try and call Namik to see what happened. Finding a phone was a bit of a hassle, so I enlisted the help of  a local street food vendor. This experience and countless following, would demonstrate how little English was spoken and understood in and around Istanbul (hand gestures followed no doubt).  He ended up being kind enough to lend us his cellphone and called the sleepy hungover Namik who

apologetically picked us up from Galata Tower where we drank Turkish Tea with our new cellphone friend. Wasting no time,  Namik took us to our apartment to drop off our bags, and took us out for a birthday celebration over beer and fries – a heightened pace we would continue for the rest of our stay! The afternoon adventures continued with us helping Namik’s friend with his  rental apartment renovation. He was expecting vacationers that evening and was in a last minute scramble to get lighting, kitchen and bathroom installed. It was cool to see local entrepreneurs making the most of a booming real estate market, and reminded us of the similar positive boom we went through in the US in the Noughties.
Culture:

We found Turkish culture to be wonderful. The people are warm, friendly, animated, and proud of their beautiful city and country. Istanbul is famously located at the cusp of Europe and Asia, at the mouth of the historic Bosphorus Strait, famously navigated by the mythological Jason and the Argonauts. This 22 mile long passageway connects the Black Sea to the Marmara Sea and the fact that it separates 2 continents means it has always been of important military and strategic significance. Istanbul was once the capital of the Byzantine Empire which flourished as the Eastern Roman Empire under the rule of emperors such as Constantine and Justinian who established the city as a Christian hub. In the 15th century, it was conquered by the Turkish Ruler Mehmet, who established the city as a Muslim one, and invested a lot of money in Mosques and other buildings, including restoration of the great walls that had surrounded the city since Constantine founded it. Walking through the city is an amazing experience.  Compared to other Muslim places we visited, 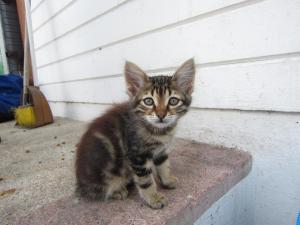 Istanbul has a very modern flavor and happening social scene. People spill out from cafes, bars and restaurants onto old cobblestone streets, while the call to prayer reverberates frequently throughout the day from the many beautiful mosques scattered about. Modern boutiques meet old city walls, and the water is never far away. It is truly a modern global city, and our favorite of the ones we visited on our trip around the world. Oh yes, one other funny thing is how many cats there are here! You will see cats roaming around all over the place, and they do not look like mangy strays, but happy, healthy, and well-fed homeless cats. Yes – the people here take care of their street animals, and we had many cute encounters with kitties during our time there.
Friends and DJ-ing: 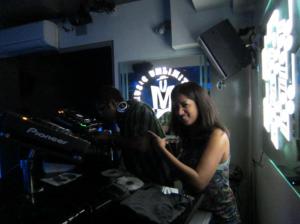 Meeting Namik and hanging out with him and his friends really made our stay special.  We visited some of his properties that he is renovating, and were amazed at the level of history surrounding them. One of his apartments has a basement with an old marble well in it – a remnant from the Roman past.  His friends, Mohammed and Shukra live in this old uninhabited 7 storey building in the heart of Beyoglu (narrow cobblestone streets – social hub), surrounded by nightlife. We hung out with them on their rooftop a few times admiring the views of Sultanahmet and the Bosphorus, and talked to them about important things like beer and the meaning of life.  According to them, this building is home to the first ever elevator in Istanbul!

Namik is well connected in Istanbul and on our first night there, he set us up with a DJ gig at his friend’s club, Jurnal 17, in Beyoglu. Tushar and I played a 6 hour DJ set, long after they shut down the club, and we danced and made merry until the sun came up! Well apparently this was a test for the following night, which we passed with flying colors, and we ended up playing at the same club to a crowded street full of people outside 3 nights in a row, with many people appreciating our unique house and breakbeat flavor, a welcome change from the usual electronic music that gets playtime there.

When you see pictures of Istanbul, you are most likely looking at Sultanahmet. This area is the historical heart of the city, and home to the famous Blue Mosque, Grand Bazaar, underground cisterns, and Hagia Sofia. The Hagia Sofia was constructed by the emperor Justinian in 360 AD, and was a church for most of that time, a mosque for 500 years, and now a museum. It was the largest dome in the world for a long time, and still a breathtakingly beautiful building. The inside is full of marble tile work and Christian mosaics (many of which

were rediscovered after being plastered over). People wait in line for ages to get in and see the dome that inspired so many others after it.
The Grand Bazaar is the oldest “shopping mall” in the world, and full of all sorts of shops, including most famously, the gold and leather sellers. We wandered through the maze of stores, hearing people barter and shop. We admired the many lamp shops with the beautiful multicolored lights, and mingled with shoppers from all over the world. One of our favorite places in this area was the Cemberlitas Hamam, an authentic 500 year old Turkish Bath, built by a Sultan to feed the social tradition of bathing. This one was unique for the time, in that it had a women’s section perfectly equal to the men’s section. Back in the day, the hamams provided a welcome social escape for women who were usually kept close to home and protected. Each is constructed 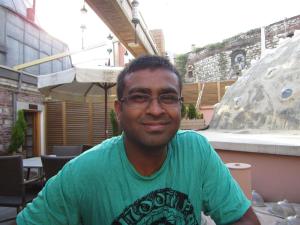 entirely of white marble. In the center, semi-clothed people lay down on a round marble slab, raising their body temperatures and relaxing while sunbeams shine down from holes in the domed ceiling. Meanwhile others get scrubbed down with loofahs and bubbles by attendants who also wash you down in annexes that surround the center slab. There are also hot pools and showers. We opted for a massage and mud face mask to complete the experience. This was a beautiful place, where we experienced history, culture, and intense relaxation, all at the same time. Fantastic!
Driving:

After itching to leave Asia, we decided to go back! Without really considering the implications, we decided to rent a car for a couple of days to help us explore more of the region that spans 2 continents.  Well we soon encountered the main issue that would plague us for a couple of days. We had to do all that we could to avoid getting in a wreck. The part of town where we were staying, Beyoglu, is like a maze of extremely narrow cobblestone streets. We couldn’t even drive ourselves to our apartment because we couldn’t figure out how to get there. There was literally one way in and one way out.  Roads would abruptly stop and switch to a staircase, cars would park alongside the already narrow streets making turning near impossible. It was out of control!  Well, I must applaud Tushar for avoiding an accident, well not quite. There was this one time where a parking attendant directed us to get extremely trapped between a wall (rock) and a car (hard place). Adventures quickly followed with the inevitable damage and car owners and yelling and defending. Good times!! The next day we drove across the Bosphorus to Asia, and intended to drive all the way to the Black Sea, but due to a lack of highways, confusing street signs, and more maze-like streets, we didn’t get quite that far. We did a chance to explore some towns on the Asia side and observed a significantly more chilled out vibe, less amenities, and (even) less English spoken. We eventually opted to spend the afternoon relaxing with a coffee and a view of Sultanahmet and the Marmara Sea.
Overall we loved Istanbul and would highly recommend it to you people looking for a well balanced destination that has a lot to offer in richness of culture, history, and good vibes.
0.000000 0.000000